The phrase Digital India is described as “… a flagship program of the Government of India with a vision to transform India into a digitally empowered society and knowledge economy.”

But these words have a deeper meaning and significance for Indians: Digital India means acquiring computer skills, learning to do business in a paperless environment, applying for services through the Internet and becoming part of a global community that lives online. Briefly put, it means a complete transformation of our work culture and lifestyle.

While Digital India sounds exciting and chic to the tech-savvy, the concept and its harsh realities can give nightmares to students and job aspirants. Online retailers could witness a boom while traditional craftsmen might vanish. Through this article we attempt to educate people on the opportunities and challenges while making career decisions in a Digital India. 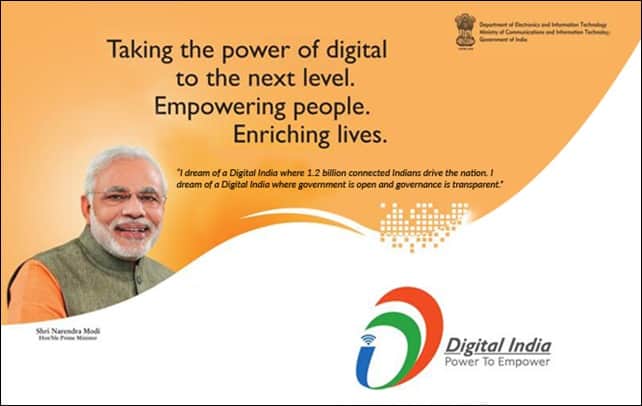 Careers that can help bridge the digital divide

The Digital India program is based on nine pillars:

While these pillars are aimed at developing India speedily, they offer immense opportunities but also some difficult obstacles.

Each of these nine pillars requires involvement of highly skilled IT professionals from the entry level to experts and at various stages. The Indian government has an ambitious plan to train some 10 million students in IT to help accelerate the implementation of these nine pillars.

In addition, some 300,000 service delivery workers for IT services while 500,000 rural workers are to be trained by service providers for their needs.

Aspiring students and individuals looking for a great career in IT can expect the Union and state governments to step up their recruitment processes- both in quantity and quality.

High Demand for IT trainers

The demand for highly skilled IT professionals to work as trainers is expected to increase sharply. This demand will most likely come from various Indian colleges and universities. Educational institutions in India will need to upgrade their academic courses to include IT based courses to meet the demand as well as train regular students to adapt to Digital India.

With 10.1 million students expected to be trained under the Digital India drive, it is imminent that IT professionals with the required skills will be in high demand.

Alternatively, IT experts can benefit from various schemes offered by the Indian government to open training centers and start-up ventures aimed at supporting Digital India. IT trainers will be in great demand in India’s eight North Eastern states which are being developed to support domestic and international BPOs.

An increased dependency upon the cyber world means loss of privacy and being prone to various crimes perpetrated through the Internet. Tracking cyber criminals is not easy: It requires complex understanding of the computer and its systems as well as the Internet. India currently has only seven forensic laboratories serving the 29 states and seven Union Territories.

Cyber forensics has yet to dawn in this country, though police departments in various major cities have specialized cells to investigate and prevent Internet crime. Despite, several cyber criminals escape the law as experts who can track using digital footprints are not readily available.

The government plans to improve governance by hearing suggestions and grievances from citizens. Plans are also afoot to offer all or most government services to public through digital means. A visit to some of the topmost websites of the Indian government however reveals a different picture: Some websites simply do not work while others are outdated.

Yet others are developed with completely useless features. The government has some projects already underway, including , a new messaging platform for government employees that has over 13 million mobiles and two million emails in the database, biometric attendance for all central government offices in Delhi, Wi-Fi in universities and in public locations, eBooks in schools, SMS-based weather information, disaster alerts.

These will require a large number of web developers and other related professionals for maintenance and upgrade.

Digital India has opened several new vistas for investors. Encouragement provided to start-up ventures. With some luck, such entrepreneurs can get finance from venture capitalists or the MUDRA Bank. Investment opportunities are available for BPOs, Internet distribution, cybercafés in rural India and other IT related activities.

Several Indian states have offered attractive incentives to investors who wish to open new businesses or start-up on their territories. Some states have upgraded their infrastructure to suit such investors.

For prospective investors however, it would be worthwhile to invest in a study about the facilities, services and funding available before embarking on a venture since rules and regulations and availability of skilled manpower varies according to every state. But to get funding, one needs to remember the golden rule: The idea has to be unique and the enterprise must be lucrative.

The Digital India drive poses major challenges too for those embarking on a career, skilled professionals and prospective investors. Prime among this is the inconsistent development patters across India: While some Indian states are in a advanced state of development, others lag far behind and border on to underdeveloped areas.

Further, IT professionals continue to fixated with the idea of migrating abroad- to US, Canada, Australia, New Zealand or Europe in search of lucrative pastures. Established Indian corporate giants can offer large salaries but start-ups and smaller investors cannot meet even the minimum wages offered by US firms to Indian employees. The false notion that highly qualified IT experts make more money and are better respected abroad than at home, continues to rule the typical Indian mindset.

The Ever Present Specter of Political Uncertainty

Despite its benefits to India as a nation, the Digital India drive has been billed by several detractors as an “unachievable goal.” Indians are well aware that several key projects launched by one government are dunked by the other after several years. This political one-upmanship has cost India and Indians dearly since trillions of dollars or crores of rupees are lost on projects that could have truly revolutionized India.

An example is the US$ 168 billion proposed inter-connectivity of Indian rivers. While the link is scientifically and technologically feasible, parties and organizations with vested interests and opposing it vehemently. Digital India also has its own fair share of critics. Before embarking on any career or investment in Digital India related projects, it would serve well to explore how far each pillar of the drive has progressed in any particular Indian state.

Sadly, most Indian parents do not encourage their children to undertake careers other than so called “time tested and proven” ones such as medicine and engineering. Those who wish to make careers in Digital India will therefore have to overcome these challenges.

Inherent Inabilities to Think Outside the Box

The Indian education system as we know it today was created by the British colonial rulers to churn out clerks and peons for the Raj. Despite several reforms, the development and upgrade of the educational system continues to remain retarded.

This prevents students from thinking outside the box and developing entrepreneurial skills. The lack of proper career counselors at educational institutions who can guide prospective job seekers and investors is a debilitation factor. A majority of Indian youth are unwilling to relocate to underdeveloped areas for better career prospects. The general xenophobia that precedes such thinking needs to be eradicated.

Higher education in India is getting pricier by the year. Every academic year sees the launch of esoteric courses as part of the academic offerings of various universities. Engineering colleges are emerging across India over the last few years: From the nearly 1,500 such colleges in 2006-07, the figure has doubled to around 3,500 during the last 10 years.

While these figures may look encouraging, statistics compiled by various organizations paint a rather dismal picture: The employment rate among the 15 lakh engineers that graduate annually, about 30 percent are at risk of not getting a job that suits their qualifications due to poor quality training, this is one of the challenge in our education system . The Economic Times also states that lakhs of engineering graduates have to settle for entry level jobs that offer salaries barely enough to meet basic costs.

India churns out more engineers than US and China combined but the quality of education and hands-on experience despite the unbearable costs. Aspirants for jobs in Digital India will need to ensure they graduate from reputed universities and have adequate practical experience. The competition for Digital India jobs is already stiff and those who lack proper academic credentials and experience can be at severe disadvantage.

A Note of Warning from India’s Vice President

The plight of India’s higher education system caused none other than the country’s Vice President, Dr. Mohammad Hamid Ansari to lament: “Almost 59 per cent of students in higher education are enrolled in private institutions.

While some of these maintain high standards, a majority are lucrative degree-granting portals where infrastructure is not adequate and admission procedure is not transparent.” Expressing concern over the lack of research and heavy financial burden on parents due to educational loans, the vice president had warned.

He also expressed concern over the lack of research orientation and the growing financial burden in the form of educational loans. “The cost of higher education in private institutions constitutes a substantial financial burden, thereby making it increasingly more difficult for economically weaker segments to use education as an opportunity equalizer. This becomes a cause of concern since opportunities for gainful employment are not getting enhanced,” he said.

According to the finance ministry data, by December 2014, some 30 lakh students availed of educational loans totaling Rs.70,475 crore.

What Are the Best Career Options After 12th (with Infographic)