There’s a very famous quote: “Apologizing doesn’t mean that you’re wrong or the other person is right. It means that you treasure the relationship more than your ego.” Personally, I believe this quote sums up the very essence of an apology letter for mistakes.

Because we might have to write apology letters to set right various records. It could be at work, business, personal life, legal requirement or just about anything.

And there’s nothing wrong with apologizing. Unless you get into that mental rut and believe it harms your ego or some misplaced self-esteem.

Actually, most people do not know what an apology actually implies. Nor why is apologizing healthy and beneficial in every sphere of life.

The word ‘apology’ traces its origins to ancient Greek and Latin languages. It means a speech given in self-defense, usually for some action.

It’s important to remember that an apology isn’t necessarily for something wrong that you’ve done. You might have to apologize for doing something right too. Why? I’ll explain later in this article.

Almost every religious and spiritual scripture emphasizes the importance of apologizing. Indeed, they extol apologizing as one of the highest human virtues.

Over the centuries, the term apology has also found uses in law, business and other everyday affairs.

Therefore, the question arises: How to write an apology letter? 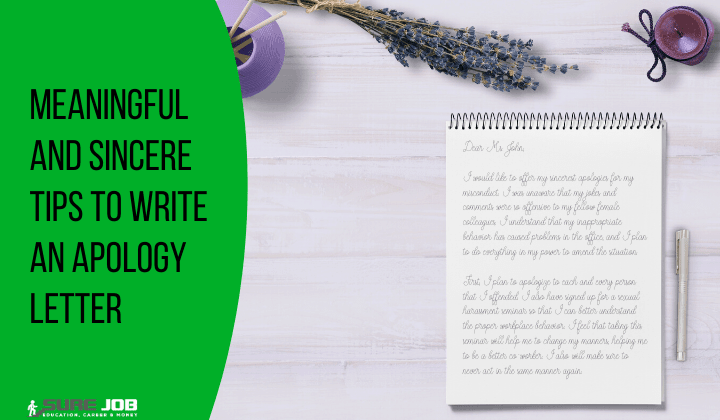 Here’re some of the answers.

How to Write an Apology Letter?

Apology Letter to the Boss

An apology letter to the boss is the simplest to write. And it can save your job too. Before penning an apology letter, assess the damage you’ve done to the organization. It could be anything. And find out the impact too.

Clearly mention your action on the apology letter and its negative effect or impact. Doing so imparts an excellent impression: it directly lets the employer know you’re responsible and possibly didn’t mean to cause harm deliberately.

And one more important thing: Do not say you’re willing to bear any penalty. That shows you’re looking for an exit or some easy way out.

Tender an unconditional apology to your business associate. However, clearly mention the reasons for the glitch, regardless of whether they are within your company or due to external factors.

And above all, make an offer to repair any damages the business associate could have sustained due to the glitch.

Also, explicitly mention the terms and conditions for making the reparations. After all, an error is an error. And reparations have to be fair and in accordance with the law.

A court of law or lawyer can send you a show-cause notice or some other legal document seeking explanation or reparations for something you’ve done as an individual or for the business.

In such a situation, hire an attorney to write an apology letter. That’s because you wouldn’t know the legal jargon. Responding to legal notices also has legal repercussions.

Hence, a lawyer would be the best person to write an apology letter. Responding on your own can actually land you in a greater mess.

Remember, a legal apology has to be made very carefully. The lawyer has to understand the situation, reasons and every other element of the case. Therefore, give all the facts to your lawyer. They’ll be able to present it best.

Apologizing to Your Beloved

That’s the most complicated in every sense. But if your beloved is aggrieved for any reason and doesn’t wish to speak, send a loving letter of apology. However, it’s important to maintain a balance in your apology.

Apologizing to a spouse or lover or a relative can leave you open to exploitation. They can use it against you and make you feel guilty for causing them some harm. And this guilt can make you a puppet in their hands.

Just write one or two lines saying you’re sorry for the action. And only if you genuinely feel you should apologize. Or, send an apology card that’s easily available from any good bookstore or gift shop.

Apologizing to a beloved can prove the veritable minefield. A letter of apology could be used against you if there’re further disputes. And it can cause immense embarrassment.

The best way to apologize? Take your phone, call that number and say sorry at the very start of your conversation. Never go into explanations.

Simply say you’re sorry and leave it at that. And don’t bother if the other person cuts the call. After all, you’ve done your best.

In such cases, never write an apology letter. Instead, send a good meme that says sorry through WhatsApp. Or send an SMS to apologize. Again, don’t explain your actions. Instead, say you’re sorry and leave it at that.

Apologizing for Doing the Right Thing

The reason is simple: to make the other person see that your intention was merely to help someone or resolve a situation. Obviously, some people would appreciate your action. Others won’t.

Therefore, write a simple apology for violating some rule. And later, describe the situation for doing it. Your job is to make the other person see the reason through your apology.

Actually, apologizing to someone for anything is proven to have excellent effects on your mental health. And this translates into making you a happier person.

Never expect the other party to accept your apology. You can’t control their emotions, thoughts or feelings or change rules and laws. All you can do is apologize and express regret overdoing something.

Furthermore, an apology has nothing to do with your ego. In fact, apologizing takes courage and indicates your good nature.

It shows you’re responsible for the others. Hence, never let your ego come in way of apologizing or writing an apology letter.

When You Should Not Apologize

If you’ll face any harm- directly or indirectly- or cause harm to others in any manner, don’t write an apology letter. The best thing to do is to forget the issue. And if you’re so inclined to apologize, speak to someone who would know about your case.

Never rush to write an apology letter. You might be landing yourself in a great mess or cause harm to yourself by hurrying to apologize.

You can use any of these methods to write an apology letter. Never download and use a letter of apology template.

That would clearly indicate you’re not serious about making an apology. Instead, use own words to write an apology letter. That sounds better and has a better effect too.

Remember, any document you write has legal implications. Especially if it bears your signature or is handwritten. In worse case scenarios, some persons can use your well-intentioned letter of apology as a weapon against you.

And that can cause serious harm. Therefore, always assess whether any situation actually merits a letter of apology. And if it does, use the above guidelines. That could help you resolve an unpleasant situation.