Overall these years, I’ve attended numerous different types of interviews. Obviously, I was successful at some while failing others for some of the other reasons. Why would I fail sometimes? Because the interview wasn’t conducted in a manner I would expect.

Appearing for an interview is usually that final stage towards getting your dream job. Surely, you wouldn’t like to fail.

Therefore, I’ll guide you through 10 different types of interview that are common in the world. And provide a tip or two to be successful. 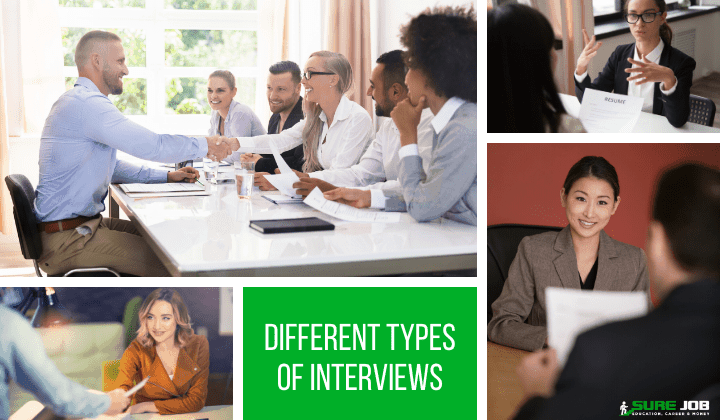 But first, let’s start by understanding what an interview is all about.

The word ‘interview’ traces its origin to the ancient French term, ‘entrevue’. In simplest terms, it means a formal meeting or seeing one another.

An ideal interview involves a formal discussion between two or more persons on a common issue- which is hiring a person.

It’s only when all parties reach an accord that a person gets the job or contract.

Unfortunately, most types of interviews in India are one-sided: interviewers ask questions and the jobseeker answers.

In some instances, interviewers may ask candidates if they have any questions. Again, the interviewee or jobseeker doesn’t grab this excellent opportunity to learn more about the job and the company.

Therefore, it’s vital to know the 10 different types of interviews and a tip or two to be successful.

The 10 different types of interview I’ll discuss are somewhat common across India. As you will see, some are complex while others can fairly simple. So read on.

Unless you’re very sure about the company, never accept a telephonic interview. It could be a scam.

But considering you’re sure the company or organization is legit, appear for the telephonic interview. Here, one or more interviewers will ask questions over the phone.

Sometimes, the employer will use conference call facilities to allow more interviewers to ask questions.

During such interviews, interviewers will try and asses your knowledge, skills and other details from the confidence your voice reflects. Usually, telephonic interviews are held for customer care jobs such as telecallers and call center agents.

Tip: Be careful when you’re taking a telephonic interview. We often forget proper etiquette because the interviewer is just a voice on the phone.

Multinational companies or those located in distant places usually conduct a video interview. They use the video conferencing system through Skype or other platforms.

Video interviews are usually held for very senior positions where the decision to appoint you has to be taken by the Board of Directors or some really top people.

Since these people may wish to stay behind the scenes, they’ll watch you on video without your knowledge.

There could be one or more interviewers for a video interview. However, you’ll never know the number of people watching the video interview so prepare for it in a good way.

Tip: Since you’ll be judged by top brass of a company, be extremely courteous and sound confident. Select a neat, clean and if possible, silent place where you can sit for the interview. Do not pick your nose or twiddle around during the interview.

A walk-in interview is held when a company wants to recruit someone very quickly. You’ll be given a specific time during which you can simply walk into the office or venue and await your turn for the interview.

Since there’s a lot of candidates awaiting their turn, walk-in interviews will be conducted by a panel of two or more officials of the company. A walk-in interview lasts for five to 10 minutes only due to time constraints.

If you’re successful at a walk-in interview, chances are you’ll have to appear for a second, more formal interview. And the second, formal interview can be of any of the types I describe below.

A regular interview is nothing spectacular. You’ll face a department head or immediate senior along with an official from Human Resources department of the organization. Or sometimes, you’ll be facing only one interviewer.

These types of interviews appear simple but can prove tough. A sole interviewer is under pressure to shortlist and recruit the best talent. And that too within a short span to gauge your skills.

If you’re competing against others for a job, you’ll have to face almost similar questions. But never ask candidates that are coming from an interview about how it went. That is clear indicator of your diffidence.

Tip: During a regular interview, focus on your educational qualifications and skills. Keep your CV, resume or bio-data and certificates handy. Do not go for the interview expecting any specific questions. Instead, be honest about what you know.

A panel interview is usually held to recruit people that have special skills such as engineers, medical experts, scientists, journalists and professionals.

Therefore, panelists can include highly experienced professionals working for the organization as well as an official from the human resources.

The job of this panel is to identify the best talent and make a spot offer. That’s because they can’t afford to lose your skills to a competitor. For they may also be waiting to recruit people with your qualifications and experience.

You can anticipate lots of questions during a panel interview. After a few basic questions about yourself, interviewers will focus on your skills and experience.

The panel will try and assess if you’re the right person for the organization. Hence, the employer entrusts the task of interviewing more than one person. So, highlighting your talents and achievements with your answers.

Tip: View this interview as a chance to boast your skills and qualifications. All panelists are interested in one thing: how best would you serve the company’s interest.

An invitation to meet over breakfast or lunch or dinner for an interview is actually as good as getting the job. However, such types of interviews are only for extremely top positions.

The reason is simple: a very senior executive would not like to attract attention by walking into a rival company’s offices. Having a meal together at some plush hotel is however different.

Only the topmost boss or two will attend such an interview. That’s because they wish to know you better and see you in person. Questions will be informal and revolve around your family, education, and experience.

Generally, these topmost bosses will come ready with an offer for you. And you can expect the offer if you meet their expectations.

Tip: Meet the top executives at the lobby of the hotel rather than the table. Never make these top execs wait because that imparts a poor impression. And better learn table manners, including proper use of cutlery.

7. Project or Task-Based Types of Interview

A project or task-based interview is held by companies usually for fresher candidates. Such interview types are for engineers and jobseekers whose technical skills matter to the employer.

You’ll get a specific project to complete within two or three days. Once that’s over, you’ll have to face one or more interviewers.

Questions will revolve around the project and methods that went into its execution. Therefore, you’ll have to remember every process that you had to use to complete it.

Questions during a project or task-based interview will revolve around technology and your reasons for doing something the way you did. You might also get a few questions about alternative methods.

Tip: Since questions will focus on processes and technologies you use, remember them well. Here, interviewers are more interested in your practical knowledge instead of other details.

They’ll ask questions to various candidates that form the group to check who provides the best answer.

The objective of a group interview is to find whether you’re shy about speaking before others. It is to make you conscious that others are also listening and put you under pressure to perform well.

Tip: If you ever have to appear for a group interview, do so with utmost confidence. Remember, the interviewers themselves lack confidence.

And other candidates will also be hesitant and diffident to answer questions. In such cases, your confidence can win the job.

Confrontation is the type of interview I personally love. It means two or more interviewers will try to pepper you with questions, often with a harsh tone.

They’ll try to get you to make you lose your cool by repeatedly asking the same thing and using the ‘gadfly’ technique that made ancient Greek philosopher, Socrates so famous.

This means, they’ll question your answer with another question. I love these types of interviews because it gives me an opportunity to punch loopholes in the interviewer’s arguments. And when you leave interviewers puzzled and confused- you’ve won the game.

Tip: Remember, the interviewers are just played acting rudeness. You don’t have to be rude or snappy while responding.

Instead, keep your cool and turn the tables by finding grey areas of the interviewer. First, listen to the question, understand it and then form an informed response. The trick here is to drive the confrontationists to the end of their wits and win the job.

10. The Executioner Types of Interview

If you ever attend an Executioner type interview, face it with full confidence. An executioner interview means the panel of interviewers will behave as though you’ve already lost the job.

They’ll try and run down everything- from your dressing style to qualifications, experience to salary.

This is actually a very interesting interview. And it won’t end with a job offer. But handle the interview with care and you can be assured about being called again or getting the appointment letter.

Let me explain further. During an executioner type interview, the panelists will try and prove to you why you’re not suitable for the job.

Counter them politely but firmly by highlighting your skills and qualifications. Use all your achievements as weapons to avoid the ‘execution’. Therefore, don’t put all your cards or weapons on the table.

Tip-1: Your interview calls is a clear indicator that the employer is interested in your services. But they want to check your interest and how much pay you’ll ask. Hence the ‘execution squad.’

Tip-2: When an interviewer runs down your dressing style, assure them with a smile you’ll dress better when you join the company and get much higher pay.

And if they deride your education, tell them that a graduate from a very prestigious institute would never apply for that job.

You’ve to shock the interviewers with your confidence and spunk to win the job. After all, they’re the ones who sent you the interview call.

Personally, I love the toughest types of interviews. Because, at the end of the day, the only thing I’ll be losing is some time and effort if I’m unsuccessful.

Yet, it would leave me with that superb feeling of not cowing down to an interviewer. At the same time, I also ensure that I’m not rude or show my annoyance at interviewers.

Instead, I prefer maintaining a calm demeanor and posture. The best way to appear for an interview is not preparing for one.

Because you may prepare for some questions while the interviewers ask different ones. Instead, just be true to your nature, education, and experience. You’ll win the job for sure.

How to Pay Employees for Great Ideas?