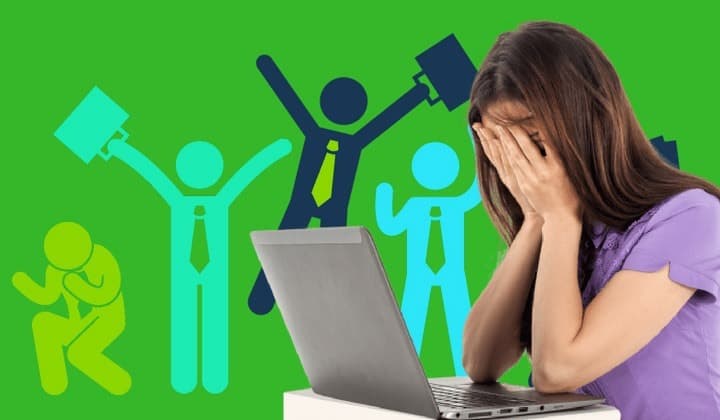 Unemployment is of concern to every country, including India. Unemployment is not merely people without jobs: it defines economy of a nation and influences politics, crime and foreign relations.

Thankfully, there is a drop in unemployment in India over the last few years, due to various reasons.

“What is Unemployment?” India is a signatory to the International Labor Organization, its various treaties, and conventions.

“Persons of legally working age that is unable to find an activity for wages or profits despite a willingness to work and available on the job market.”

Before studying unemployment rates in India, it is vital to remember points. 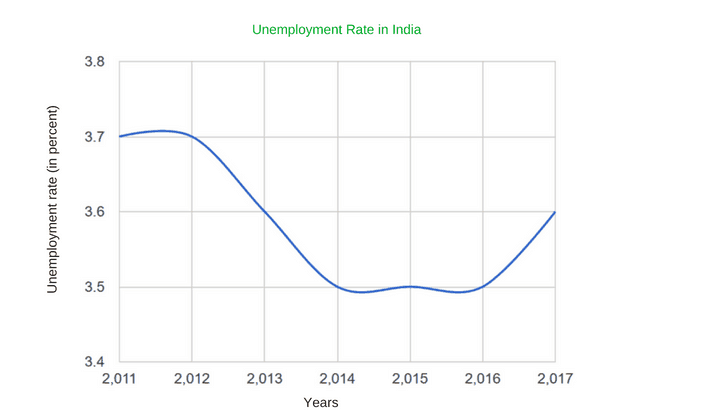 About 31 million or 3.8 percent of India’s population is unemployed, according to figures released for 2017 by World Bank.

This is due nearly 6.8 percent increase every month in the number of people that do not have jobs for any reason in 2018, says Center for Monitoring Indian Economy (CMIE).

Causes of Unemployment in India

Cause of unemployment in India, unlike other parts of the world, has several unique reasons. Thankfully, steps taken by the Indian government over the last four years is lowering unemployment rates, some causes continue to persist stubbornly.

Holding useless educational degrees is the main cause of unemployment in India, according to Associated Chambers of Commerce and Industry (ASSOCHAM).

For example, over 1.5 million Indian women and men graduate as engineers every year. Among these, 80 percent engineers are unemployable because they hold degrees acquired from ‘B’ and ‘C’ grade educational institutions including some ‘Deemed’ and ‘Private’ universities.

The same holds true for graduates of Master of Business Administration: only seven to eight percent graduates that hold degrees from top business schools find jobs.

In brief, their degrees exist only on papers while graduates possess no skills to match their qualifications and job market demands.

According to Ministry of Human Resources and Development, there were 819 universities of all types in India at the end of June 2017.

The figure could have marginally increased in 2018.

Majority of Indians are unwilling to relocate within the country for employment purposes due to family ties and xenophobia.

Despite excellent job opportunities available in different states, a large number of qualified women and men do not wish to take jobs outside their town or city.

Indian women are biggest victims of this phobia to relocate. Archaic Indian traditions demand that a woman lives with her parents till she gets married.

In spite of modern trends, most Indian parents ardently hold fast to the idea that sending a daughter to work elsewhere can adversely impact their reputation, the woman’s character, and matrimonial prospects.

Some shift in this trend is evident among educated families living in metro cities.

Hence, they are unwilling to work for the private sector despite holding excellent academic qualifications. Excellent perks enjoyed by ‘government servants’ attracts most graduates to keep trying for state jobs rather than find gainful employment with the private sector.

Unfortunately, jobs with the Central and state government are considered as secure. Promotions and salary increments are handed on the basis of seniority instead of efficiency and competitiveness.

Unsuccessful candidates for government jobs eventually work for the private sector but get counted in the unemployment rate of India till they begin earning.

For example, people from so called ‘higher’ caste will never take employment for roles that were traditionally performed by those from ‘lower’ caste.

Unfortunately, a lot of organizations in India tacitly enforce the caste system: while they willingly hire people from matching castes, they reject jobseekers from other communities as unsuitable for the job.

Further, the ‘Reservation’ system enforced by the government allotting quotas for underprivileged sections of the society also prevents people from ‘lower castes’ seeking employment in the private sector.

This increases the unemployment rate in India.

Stigmas are attached to women working as cabbies, auto-rickshaw drivers, bus conductors and other similar jobs that are traditionally viewed as a male domain. Consequently, thousands of Indian women go unemployed.

Despite recent strides by the Indian government to eradicate gender inequality in jobs, the problem persists.

For example, qualified and aspiring Indian women cannot take up several types of jobs in the Indian Armed Forces.

Nor does Indian Railways hire women ticket checkers for deploying on long-distance trains, though the system is now being changed.

Types of Unemployment in India

This means, people working informally, without proper job contracts and sans any legal protection. Vulnerable employment is the main type of unemployment in India.

Such employees work in poor conditions and have almost no rights. They do not earn much money.

Usually, persons with vulnerable employment are deemed ‘unemployed’ since records of their work are never maintained.

Put simply, disguised unemployment means or is a situation where a large number of unskilled and poverty-stricken people are hired for seasonal work for very low wages.

Hence, their records are not maintained and figure as ‘unemployed’. Disguised unemployment in India is rampant in the large agriculture, construction and unorganized hospitality sectors.

Disguised unemployment commonly found in rural areas of India, though some examples are also evident in large metros.

Structural unemployment is also rampant in rural and urban India. It occurs because skills of a worker do not match requirements of an employer.

Make in India initiative launched by the Indian government and influx of foreign companies that require highly skilled employees is causing structurally unemployed in India.

Since India has a booming industrial base, there is a demand for almost every skill in this country.

Insufficient knowledge about employment opportunities is also a contributory factor and can be blamed on adult illiteracy: a lot of people that are willing to relocate do not know where to go since they cannot read or write.

These type of unemployed people are called frictionally unemployed.

This is another variant of Vulnerable, Disguised and Frictional unemployment categories. Seasonal unemployment occurs in India on account of extreme weather conditions making work impossible.

It also happens because some industries in India function seasonally- such as before festivals or elections and other occasions.

Sadly, addiction unemployment is a completely neglected sphere in India, unlike in other countries. As the term implies, this category of unemployment occurs when a skilled person cannot find work due to alcohol or drug addiction.

Addiction employment can be effectively curbed through proper rehabilitation of addicts. Yet, myths surrounding addictions is inhibiting eradication of this type of unemployment in India.

In India, nothing is being done to wipe out unemployment caused by accidents and chronic sickness. Employers shun skilled workers that sustain physical disabilities due to accidents or become chronically ill for any reason.

This forces them to live a life of penury and sometimes live on streets. Very limited resources are available for victims of accidents and chronic sicknesses to find employment in India.

Developed countries have elaborate programs for rehabilitating former convicts of crimes into the mainstream society. In India, such programs are conspicuously lacking and at best, inadequate.

Crime-related unemployment is a very serious issue in India. Yet it lacks any serious attention from the government or NGOs.

Reformed criminals in India often find themselves unable to find suitable, well-paying jobs to restart life as responsible citizens, due to social stigmas. The situation often forces them back to crime.

Again, this type of unemployment is most neglected in India.

Calamity unemployment occurs when people from one region are forced to migrate to another geographical location due to natural or human-made disaster.

Consequently, they cannot find jobs and are forced to eke existence as beggars. This situation affects people with limited skills. Floods, droughts, earthquakes, landslides, terrorism, and insurgency cause people to move away from their native land.

They sacrifice their jobs in favor of safety and security for family and self. Yet, they are unable to find employment in other areas of the country.

Though all these types of unemployment in India are common, future projections appear quite healthy for the country’s prospective and aspiring workers.

Future of Unemployment in India

The figure of 3.6 percent to 3.8 percent unemployment among the working age group is expected to drop drastically by the year 2020.

Unemployment is the main cause of major and minor crime in India. It is also the single largest contributor towards suicide, after failed relationships.

Data from various sources indicate, migrants to other states take to crime after failing to find suitable employment.

While some engage in petty offenses such as stealing money and stuff to buy food and other needs, others enter organized gangs with the hope of striking rich fast.

There are various figures of unemployment in India. ILO and Organization for Economic Cooperation and Development (OECD) pegs India’s unemployment figure at 3.4 percent.

However, the CIA figure also includes substantial underemployment or people that do not have jobs matching their skills and part-time workers.

Unemployment is a major threat to every economy, including India. Rapid industrialization and increasing self-employment opportunities are reducing unemployment in India to some extent.

However, unemployment in India caused by factors such as gender inequality, reluctance to relocate and useless educational degrees are likely to persist.

5 Questions to Ask Yourself Before You Apply for the Next...